SPARC Paint Down the Wall 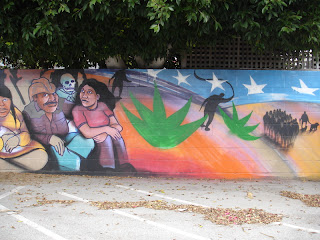 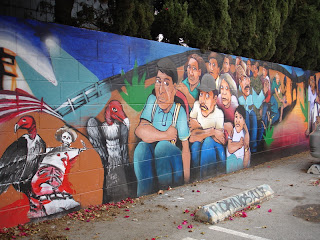 These are a few details from a still unfinished mural in the parking lot of SPARC, The Social and Public Art Resource Center in Venice, California.
The project is called Paint Down the Wall. The mural is the work of a team of young muralists, some of whom have worked with SPARC for a number of years.
Their mural is protesting the building of the wall between Mexico and the United States as well as the brutal actions of vigilantes who stand at the border. The wall itself is only one physical manifestation of the anti immigrant frenzy that has spread across the USA. The absurd hypocrisy is that as anti immigrationists are shutting out people trying to make a living, the full enactment of NAFTA ( as of yesterday) will dump US subsidized cheap corn, beans, and sugar on Mexico, putting thousands of farmers out of business. There was a big protest yesterday in Mexico, reported here only on Free Speech Radio News
The mural shows Mexican immigrants at the border of all ages, men, women, grandmothers, children. They seem to have already been detained. At the center of the mural are turkey vultures, one of them grasping a bleeding calaveras ( skeleton). A captured family crouches under a tree, death as a calaveras lurking just behind them, while in the distance dark shadows of vigilantes threaten captured illegal immigrants with a whip and a dog. 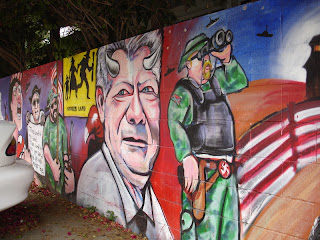 At the other end of the mural a looming portrait of a Minuteman and other paramilitary types create a physical blockage of the space. A self styled vigilante with a blond goatee looks at the border with his huge binoculars. An elderly white man holds a sign" This land is my land, This land is not your land and it will never be."
The yellow and black highway sign of a running family that warn drivers of immigrant families crossing the road now includes the words "stolen lands" in a reference to the fact that all of California, Arizona, New Mexico and part of Texas were declared part of the USA after the Mexican American war in 1848. All Chicano/as are historically Mexicans who ended up on the wrong side of the border. Only the lightest skinned former Mexicans were allowed to become US citizens.
Currently, SPARC is running a fund raising campaign to save the many murals in Los Angeles that are threatened or destroyed, or covered with graffiti . Attacks on the murals, like attacks on immigrants, are on the rise. Part of the reason is the government's actions in shutting down creative outlets that provide opportunities for youth to express themselves constructively.
Go to their website to see more of their murals and donate to save the murals www.sparcmurals.org.
These murals are worth studying by anyone who wants to make a mural, a skill that is notably declining in our culture. Baca's own roots are with David Alfaro Siqueiros as a muralist and she encourages others to follow in that grand and outspoken tradition that uses large scale figures and dramatic spatial relationships, as well as clearly written texts incorporated as signs, to make the mural speak out loudly and clearly. That is the crucial element, that we can understand what this mural is about without knowing anything. And we can be educated by it.

Here is SPARC's statement about the PAINT DOWN THE WALL project. It is ongoing:

"When world events become so intolerable that you must take action, artists have the power of their brushes, spray cans, pens, cameras, to respond. We are asking those of you who object to the creation of a NEW BERLIN WALL on the border between the and to take up your brush and respond. We are organizing first a virtual paint in on the Internet which will be followed by n action at the border fence in the Playas de Tijuana to place our designs on the actual wall. Follow the instructions below for adding your image to the wall and sign up for our newsletter for further plans to PAINT DOWN THE WALL "

Where I live, it's impossible to discuss the plight of undocumented workers. Oklahoma passed one of the most regressive anti-immigration laws in the country. NAFTA has devastated much of Mexico, and it's harmed the US as well. It matters not. The focus in this state is to stop the brown people from coming.