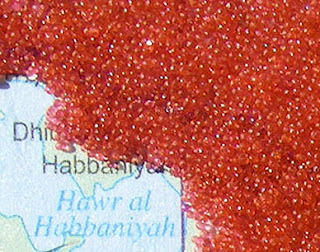 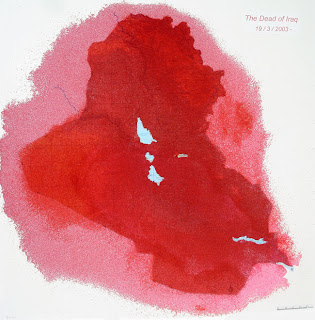 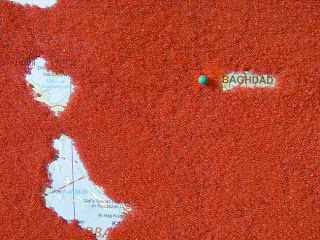 Dead of Irak, 2008
foamcore.
32 x 32 in.
Iraq map and glass microbeads 1/2 mm. diam. each (about 1 million)
Close up the separate small red shiny beads jump out at us, we can feel them physically on our skin, crawling on us, as a flow of blood, as a coming tide, it is our flow, the flow that is a tide of death, it comes from our bodies to the bodies of the Iraqis. It is covering the country except for a few small places. The blood as beads reminds us of the individual lives that are being destroyed paid for with our taxes, the blood as land reminds us of the land that we are poisoning
( as recently we dropped tons and tons of bombs on the orchards outside of Baghdad in order to "catch a terrorist cell", one house I think was the target. The depleted uranium that poisons the blood of the future generations of Iraqis, the poison toxic fumes that we spread with our weapons.

The artist Athena Tacha describes it as follows:
"It came out of my pain and sense of impotence for stopping the War. I had actually done in the past, on an off, political art (mostly activist about the environment), particularly during the Vietnam war On my website, look particularly at my Massacre Memorials (www.oberlin.edu/art/athena/tacha2.html#memorials) and its statement, but here is another statement I made recently in a feminist context:
"...deciding to make public art IS a political act in itself. In 1970, instead of becoming a volunteer nurse in Vietnam, I personally opted to bring my art into the public domain and make it accessible to all (not just to the intellectual elite who goes to museums, or to the rich who can buy it). As I stated in my interview with Landscape Architecture magazine (which published the first important article on my public art in May 1978), I wanted to “bring art into the lives of people and endow it with a social function” (such as creating sensitively designed plazas, recreation parks, riverbanks, etc.)."

In a way I consider the Dead of Irak a sequel to the my Massacre Memorials of the early 1980s ."