The Breach: A play about New Orleans 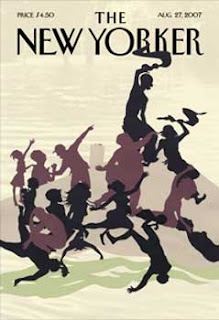 This is Kara Walker's August 27 2007 cover for the New Yorker, made one year after hurricane Katrina and the drowning of New Orleans. It refers to both the event itself, and its aftermath of false hopes, bungling, and outright racist greed for land ( via the tower in the distance) . It is called "Post Katrina Adrift"
Any art historian recognizes its source in Gericault's Raft of the Medusa, another story of government incompetence that led to death by drowning.
It is fascinating to see how Walker has closely followed and adroitly altered the original.

In the Breach, by Catherine Filloux, Tarell Alvin McCraney & Joe Sutton, the central narrative of the play is based on three people on a roof top who have to fight with gravity in order not to drown, each of them falls into the water that surrounds them and is rescued, until the final concluding scene in which two are drowned. The parallel to the Raft of the Medusa is inescapable also in the play. There is also a baptism providing an ironic purifying with the polluted water that surrounds this family.

The narrative on this rooftop, between a grandfather and his teen age grandson and small granddaughter ( who speaks through her adult self), includes the psychodrama of any life threatening place, replaying small tensions and large anxieties, ranging through emotions from happy to heartbroken.
It is set in the midst of New Orleans, but it is a classic piece of theater that rises above that specific event to be almost Shakespearean in its characters. It resonates with THE flood of the bible, with Michelangelo's Flood on the Sistine Ceiling, the story of Aeneas and Anchises, the elderly saved by the young.

Two other narratives, of an elderly alcoholic bar tender and a self proclaimed liberal reporter, who interact with the flood in other ways, one to confront his own death, the other to meet survivors who in their honesty and maturity confront the writer with his own limitations. He learns more about himself than about the disaster he is reporting. His only goal was to "expose the fiction" that the levees were deliberately breached. That pre planned agenda undid him when he was confronted with the realities of the people who had lived through this and other floods, the flood of life in general.

In the midst and moving through all of this is a figure of water, who shimmers and seduces all around her. Adding the mythical element reminded us that it was all a fiction, all a fragment of a much larger reality. Although the three playwrights continually spoke of "truth" as what they pursued, what they have really pursued is the reality that there is no truth, only human relationships.

Those human relationships of the play, today in the real world, continue to struggle against the larger forces which have now arrived to "rescue" them, by destroying their homes, and, as in so many cities, replacing low income housing with lucrative developments. The strong characters of New Orleans must continue to resist outsiders who threaten to inundate them, whether it is nature or the forces of capitalism.

The play's use of water as a dominant mythic presence also reminded me of Kara Walker's show at the Metropolitan Museum of Art in honor of Katrina. She also emphasized the role of water "the story of muck" as she put it, by including Copley's Watson and the Shark an image of an almost drowning and Winslow Homer's Gulf Stream, both paintings of survival in the midst of the dangers of water (in both these paintings actual sharks- in New Orleans human sharks are circling). 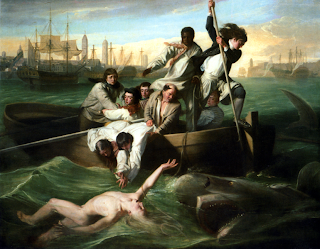 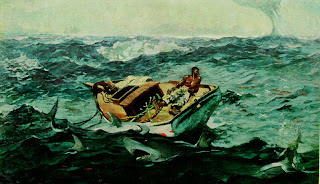