Joan Snyder Blood on our Hands USA 2003 oil, acrylic, newspaper on board 16 x 16 "
Joan Snyder includes a photograph taken in Baghdad shortly after the Shock and Awe campaign of a mother holding her wounded child
Here is another work by Joan Snyder, "Boy In Afghanistan", 1988, 24" x 30") about a boy injured by land mines. 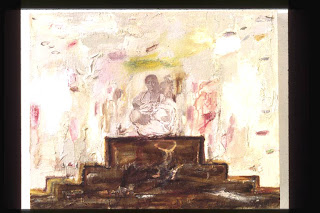 And a third below
Child, 1989, oil, acrylic, newspaper on linen, 8 x 12" It makes a reference to children who are starving. 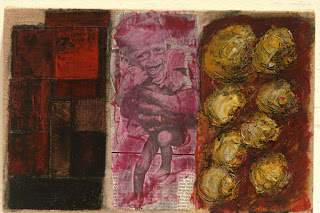 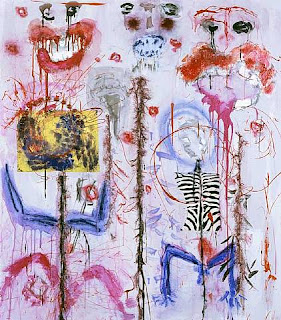 This painting by Joan Snyder is called Modern Times, 2007. The image is full of agony and suffering. It reminds me of a late work by Arshile Gorky, with its elongated and disrupted lines and incomplete forms. The colors are oddly garish and pastel at the same time. There might be three main figures, and several smaller figures, bleeding, gaping, reduced to skeletal structures. The hollow eyes and mouths drip blood. Falling figures descend helplessly. To learn more about Snyder's way of working go to this website 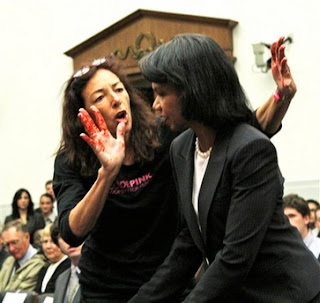 Joan Snyder is right though, the blood is on OUR hands. It is our money and our government and our ridiculously passive Congress that is enabling the bloodshed.

Email ThisBlogThis!Share to TwitterShare to FacebookShare to Pinterest
Labels: Joan Snyder, Valentine Blood on our Hands