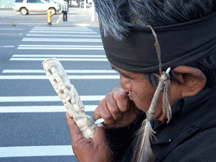 John T. Williams was a seventh generation wood carver of the Ditidaht Tribe on Vancouver Island. He lived in Seattle, in housing created by the Downtown Emergency Center that understands that just because people have a problem they still need a place to live. John had a problem with alcohol abuse, he had been making his own way on the street since he was seven years old. He made his way by carving small totems that he sold to tourists. His father taught him, and in the old days, they used to make a pretty good living at it. Cyney Gillis writing for Real Change News has given the only coverage of the full story of John T. Williams life.
He was shot and killed by a white policeman as he crossed the street at an intersection on his way from where he lived to where he hoped to sell his art at Pike Place Market.
He was shot four times because he didn't stop when told to by a police officer who seems to have been terrified of his small pocketknife. John T. Williams is hard of hearing. He was simply crossing the street. Now he has died.
What an abrupt contrast to my previous entry of healing, and community.
Unfortunately, the fate of John T. Williams is what is going on today.
This small blog honors his art, his life, and his spirit, in keeping himself going all these years, without any of the supports of a middle class life that we all take for granted.
Thank goodness the Indigenous community has risen up in fury, they are holding daily vigils, marches on City Hall, confrontations with the Mayor. Here are a few pictures. 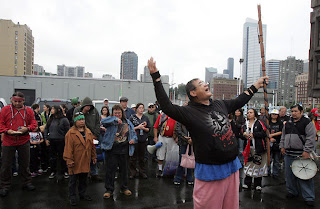 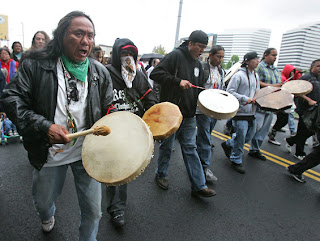 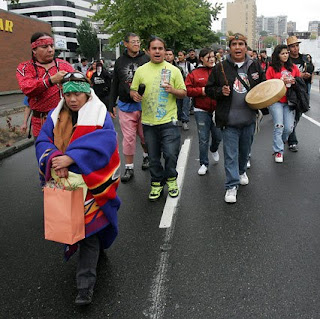 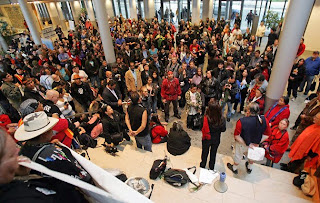 The last one is the tribal community in City Hall. The Mayor of course said it was a tragedy. But this is more than a tragedy, this is racist murder pure and simple.
Posted by Susan Platt at 3:14 PM

This case is clearly a arrogant policeman committing murder. I'm an older man and I can take a knife away from somebody with a police baton or broom handle. What happened to his taser? The killing of this man should not be tolerated!