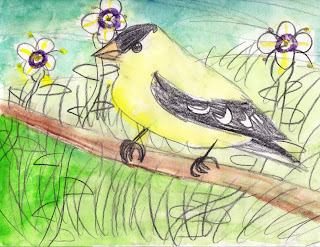 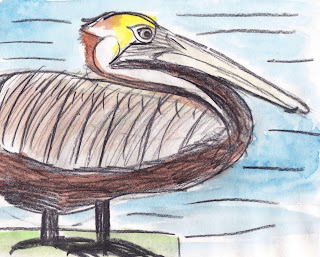 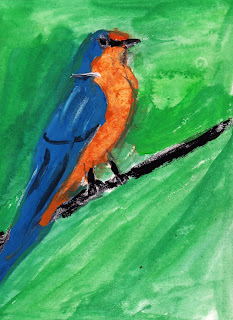 Eleven year old Olivia Bouler began her presentation at the Audubon Seward Park " My name is Olivia Bouler, and I am here to tell you that one person can make a difference." The laid back Seattle audience was not used to such up front assertiveness!
Olivia has drawn pictures of birds and raised $150,000. for Audubon to help with efforts to clean up birds soaked in oil in the Gulf. So far the counted number of birds who have died is 8,000, but the actual number is much higher because off shore birds may have died in the thousands without our knowing about it. Then there are the sea turtles, the dolphins, the many many nesting grounds. All of us agonized. Olivia did something.
I have been expecting artists to have stepped up with an outpouring of art about the spill. Some of them have.
Someone sent me this photographic project by Jane Fulton several months ago. She actually posed people on Lake Michigan, but the point was obvious and affecting. It is called Crude Awakening. 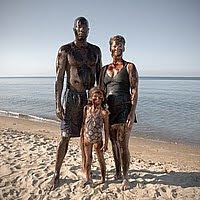 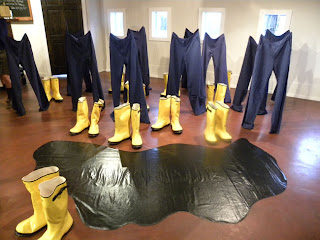 Here is another work by artist Io Palmer
The installation is in her new exhibition at a winery in Eastern Washington State. She said that she was intitially thinking about stomping grapes because of the location of the exhibition, but as the images of the Gulf Spill overwhelmed us all summer long, she made this piece with its emblematic references to those trying to help. "The oil spill is one more emblem of America's incessant and uncontrollable greed and consumer driven desire"
The most recent issue of the National Geographic is a must see. It has a fold out map with the layers of life in the Gulf on one side and a map of the oil wells on the other, as well as photographs of the ravaged estuaries from oil pipes, dumping, and other polluting activities. A tragic photograph of a dead baby sea turtle in a sea of brown oily mud and an image of an oil covered pelican strike to the very core of humans' stupidity.

The reality is that this oil spill was inevitable, that the protected areas of these Gulf coasal zones are just a very thin area * as we see in the amazing National Geographic map of life and oil on the Gulf, which I cannot download for the blog*, compared to the ravaging, thirsty oil industry.

We all understand that half the population along the Gulf depends on the sea and the other half on the oil industry. So they will soon be back to drilling deep again.

But what if we all started living a different way, if we imagined a different future, and we insisted on it. We really have only two choices, the end of the planet as we know it, or going in a new direction.

I realized recently how fortunate I am that I hardly drive at all in my day to day life. The vast majority of people are imprisoned in their cars, sitting in traffic everyday. I walk, bike and take the bus. But I am lucky that I can. Lots of people would like to do that, but it takes time that most people don't have. And most or our urban and suburban lives are designed to require us to drive.

But what if everyone just stayed home and didn't drive one day a week, or stopped buying all those petroleum encased (organic) vegetables or just tried to buy food in packages we can re use at least once.
Small efforts.

As Olivia said at the end of her wonderful presentation in which she celebrated birds  "If insects disappeared it would be the end of the world, if humans disappeared, it would save the earth." And then she said, "An individual can make a difference, but all of us together can make more of a difference."  She not only drew pictures, she also went to Congress to lobby for another type of energy. I wonder if they condescended to her. She is more on the ball than they are. She has, apparently, been all over the news. But the real story is that she really cares and did something about it.

This summer and fall Congress voted billions to continue with our support for petroleum pursuing and consuming wars, as well as failing to pass clean energy support.

If the BP spill didn't wake up Congress, what will. And of course, this was really no surprise, BP has been a bad actor all over the place with their oil fields, Alaska has been full of spills they caused.

Here's to this young lady. She acted on what she believed in. If only we could all do that, even for one day it would really lead somewhere.
Posted by Susan Platt at 3:02 PM