9 Scripts From a Nation at War at the Tate Modern 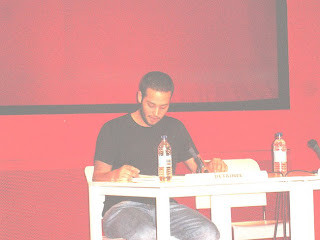 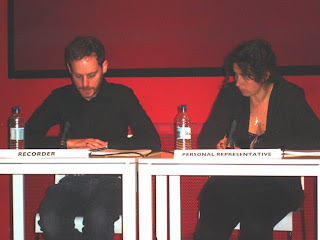 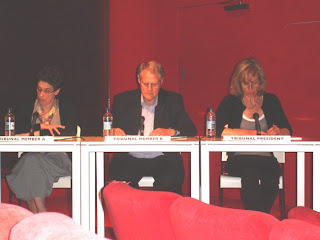 The Performance of the Combatant Status Review Tribunal at the Tate Modern was based on the online transcripts from the Department of Defense of the tribunals that were invented after the Supreme Court said that Guantanamo prisoners should have some rights. The fraudulent character of the tribunals came across loud and clear in the performance. There were three tribunal members, then there was a "recorder" and a "personal representative" ( that's a substitute for a lawyer), a translator, then the detainee, he had an empty chair next to him for a witness( he had the right to call witnesses, but of course calling someone all the way from Afghanistan was impossible) Finally there was a narrator, which was not part of the transcript, but kept the audience on track.
The collaborative of artists who created the work ( David Thorne, Katya Sander, Ashley Hunt, Sharon Hayes and Andrea Geyer) selected material from the total transcripts to make a four hour performance.
The result was searing. The detainee's words dominated the presentation. We learned that they were in Guantanamo for random reasons ( an assistant cook to Bin Laden, watching a piece of land ( which was clearly in the wrong place), getting arms training in Afghanistan to defend himself in Africa, working in a shoe shop ( again obviously wrong place),
In several cases they declared that they didn't understand the concepts, (not surprising since we don't either, and several declared that they had no education), didn't know it was an Al Queda camp, etc. It was obvious that these were randomly imprisoned. In the first transcript on the Department of Defense website referenced above, the detainee seemed to only be growing vegetables.
The day after I heard this performance the Supreme Court upheld habeus corpus for Guantanamo Prisoners.
The performance was part of an installation at the Tate called "9 Scripts from a Nation at War"
It included Citizen, Blogger, Correspondent, Veteran, Interviewer, Student, Actor, Lawyer.
I was intrigued by the choice, there were no politicians, no generals, no political activists, war resistors, or demonstrators. The blogger was a composite anonymous blogger, chosen because blogs have played such an important part in the war.

In each case real people were interviewed, then their words were edited and re-presented by
actors. In choosing the veteran, they asked for veterans who were actors. The veterans were asked about the transition from civilian to soldier, how an individual dissolved into a group as a result of military routines, how someone moves from individuality and to collectivity.

The result was much more mediated than the recent testimony of the Winter Soldiers. In those testimonies, brave veterans were describing the actual atrocities that they committed. They were speaking as individuals, they had re entered society from the collectivity that was forced on them in the military.They covered in detail as eyewitness accounts of the occupation, the horrors of racism, breakdown of the military, the abuse of power, pillaging, rape, and much more.

So the question is, did "Nine Scripts" work? It worked because it was so undramatic and monotone. The fundamental problem with a nation at war is, especially with Iraq and Afghanistan, is that we are just going on. These nine scripts are only a few of the parts that people are performing, the parts that are constructed in the public arena.
We just go on and on performing, as we perform we can convince ourselves that we are actively involved in stopping the war, but actually, we are just drones in a huge system that is manipulating us. The individual is embedded in the collective of society as a whole, not just as a soldier in the military. Of course that doesn't mean we should stop for a minute our resistance. Without it we are completely lost. "Nine Scripts" represents a type of resistance to the status quo even as it records how we are all embedded. It made me want to redouble my efforts to get out into the street and protest.
Posted by Susan Platt at 6:37 PM