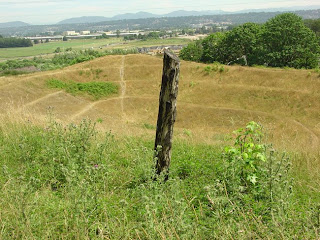 Robert Morris Johnson Tar Pit, 1979 is one of his rare earthworks. Here you see goats eating off encroaching blackberries and maples.
Morris resisting making a beautiful place that would let the ruin of the environment off the hook, but he did create a usable park for the now dense development on all sides of it.
Dirt bikers love its steep hill. It is not quite a comfortable bucolic place, it is a steepish grade with few places to sit. Still it is an opening in the land now that suburbia has choked off all the other open land in a carpet of houses in every direction.

Not far away is Lorna Jordan's Waterworks Garden completed in 1996 . The first picture shows how it used to look. It is a serene parkscape intended to cleanse wastewater as it runs through a series of pools down a hill. Jordan created grottoes and mosaics that carry us along in a happy bucolic state of mind. Except for the fact that the pools you see are now choked with algae blooms . The surfaces are densely covered with green slime that is choking off all life. The irony is that the water appears free flowing and clear at the point that it enters the garden and by the end, instead of being cleansed, it appears to be trapped into an dense sludge. Jordan, unlike Morris, creates an arcadian environment in the midst of heavy industrial sites on all sides. Is this cosmetics for industry. Is any one near by paying attention to the detergent they use in their washing machines? You know those detergents that come in the giant plastic bottles that Americans use to constantly clean their clothes and pollute the planet simultaneously. There is no sense of a real connection to the ecosystem in America. In PC Seattle we drink shade grown iced coffee in giant plastic cups with plastic bubble tops on them to keep them from spilling. etc. And we buy organic raspberries in non recyclable plastic boxes. 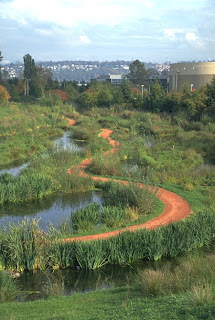 I wonder if Lorna Jordan or Jones and Jones who designed the ecoscape can save Waterworks Gardens from algal bloom, or if what we really need to do is have a field trip for all the neighbors on laundry day. Perhaps Lorna will see this and think about what to do.
The last time I contacted an artist about an earthwork that had gone algal the artist replied that she actually had not even made it, that she had sold the idea to local people. Interesting. It was in all the books as one of her most famous works. She suggested I should do something about saving it.
I am not going to name her. That isn't really what this blog is about. I am not outing fraudulent eco artists. I am thinking about the tricky ethics of eco art, it overlaps with coverup of bad people who make a mess, and colonizing poor people who don't have parks, but it also involves a lot of artists who really do care about making the world a better place. Those artists are not the famous artists, the rich artists, or the trendy artists. They are people who get down and dirty with other people and try to move a few steps forward. And do the algal blooms change the fact that Lorna was trying to make a difference. Rather than bulldozing like a Smithson, she and Morris were restoring, Morris with the intent to say hey this is ugly anyway, Jordan with the intent of giving us a respite in an industrial wasteland of concrete plants.
More to follow on this subject, suitable for summer. What about artists and global warming? 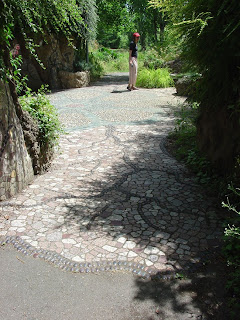 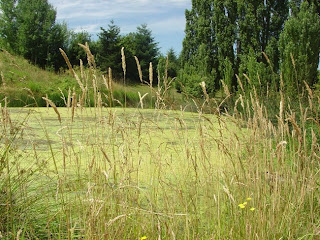 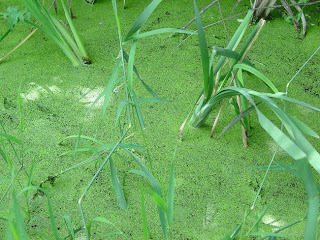