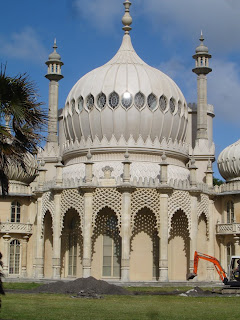 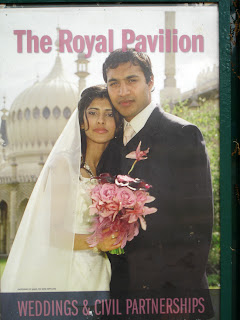 Last entry on my trip to England, we made another foray into Orientalism by visiting Brighton an example in architecture that long precedes the painters in the Lure of the East (see below)
The Royal Pavilion is an extraordinary monument that lays out in its every detail the British perspectives on the rest of the world at an early date in the course of Empire.

The exterior was designed by John Nash for Prince Regent George IV in the late teens of the nineteenth century.
We all know it was intended as a pleasure palace, so of course, it had to be looking at the "exotic " styles associated with pleasure. Outside is based on John Nash's references to what appears to be Islamic architecture. His source was drawings by a father son team Thomas and William Daniell, who traveled all over India publishing a book in 1808 "Oriental Scenery" and in 1810 " A Picturesque Voyage to India by the way of China." No one had yet had access to the Taj Mahal and Fatahpur Sikri. What comes across is a complete lack of integrity to anyone at all familiar with Islamic architecture. It is crudely assembled,with all the panache of someone who knows he is a leader in his field. Nash, the expert in the restraint of Regency architecture, has here indulged his every whim, with little sense of a need for integrity. This is after all built for a Regent, later King, who simply indulged all the pleasures of life as his main occupation. This not coincidentally was at the height of the British colonizing process in India, as the British government began to see itself as the civilizer of a backward country, after several hundred years of trading with India.

The interior is Chinese inspired, that is artists in England "copied" designs based on ceramics, textiles and other decorative objects brought to England. This trade with China was based on forced trade insisted on by the British who had bombed the port of Humen in Guangzhou in 1637, and introduced opium for the first time into China in 1800. The pink cheeked women with Chinese features, and the decorative dragons and snakes throughout the interior suggest the artists and George are co opting the power of Chinese dragons, even as they are trivializing it as a grotesque three dimensional ornamental device.
Inside the Brighton Pavilion, Prince Regent George IV had lavish parties for people with nothing else to do but eat, play cards, and ride horses.He had little to do with the policies of the government in the countries upon which his palace was based.
In front of the pavilion is the poster you see above. Note the ethnicity of the bridal couple, as though today the pavilion is most appropriate for Indian couples !
It is all so clear and obvious in architecture and painting, how the "West" views the rest of the world.
Posted by Susan Platt at 11:40 AM