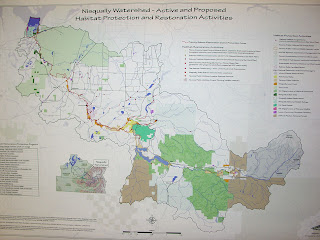 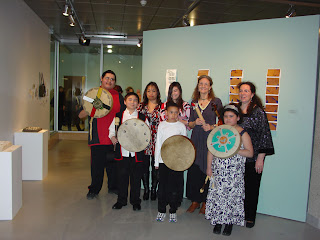 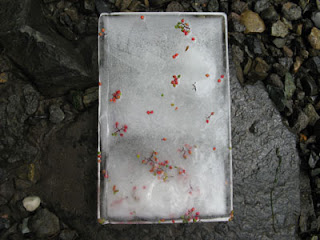 I want to report on the stunning exhibition by Basia Irland at the newly re-opened gallery at The Evergreen State College.

Basia is from New Mexico. She has been the fortunate recipient of a Tom Rye Harville award at The Evergreen State College that has made possible "A Gathering of Waters, The Nisqually River Source to Sound," Basia's special focus is water in its every aspect. The Nisqually Gathering Project has lasted a year and it is not yet finished. There will be a final ceremony when the gathered water is returned to the river. She worked with students, scientists, biologists, children, all sorts of people who live along the Nisqually River in Central Washington State. Each one gathered a little water in a container and wrote in a log book about their experiences of the river, the water, as they gathered it.

I confess I was a little dubious about this project when I first heard about it. I was afraid it was a little too grassroots, literally and figuratively. I was afraid it was a kind of fake ritual based idea. But what really works is that the project is about water, it included scientists and ecologists and park rangers. It created connections with people and water, and educates us about the crucial place that water has in our lives. We see the Nisqually River watershed on a map, not the state highway system!

The Nisqually is particularly appropriate for such an endeavor: it starts at Mt Rainier, travels through various tributaries and a national park, national forest, military reservation, and finally ends in a delta on Puget Sound that is a bird sanctuary. Not very long ago ( 164 years to be exact) this land belonged to the Nisqually Indians. They still havesections of their reservation along the river, although much of it is now controlled by the military base at Fort Lewis. They have fought hard for their fishing rights and they are still fishing for salmon there. I did another blog entry about them. They are also collaborating with whites in restoring the river.

The exhibition documented the gathering of waters, as well as groups of student works from The Evergreen State College who made their own art work, or students in environmental sciences who studied the ecosystems.It included their displays, video made by Basia of the project, and her own art work, which is books made from the materials she gathered along the river such as barnacles and sand.

It also included videos of her ice books. The ice books have been frozen with seeds embedded in them in her freezer, then carved into books. They are placed in the water and they dissolve. The plant seeds are good for natural plant growth on the banks of the river and hopefully will land and germinate.

Basia is a poet and an artist. Perhaps her biggest contradiction is that she has such a strong sense of aesthetics that even when she is representing pathogens like e coli as a reference to water borne illnesses, she makes them beautiful. Her videos and her art work are so carefully crafted aesthetically, that it almost gets in the way of her crucial political engagement. Her gentle personality is also subtle. How can such a lovely person change the world? Only through the power of her concern about the planet. At the opening she thanked everyone and then reminded us all that someone dies every 8 seconds from a preventable water borne illness. She is urgent and intense under her gentle facade.

The opening included a dedication of the gallery by Skykomish elder Delbert and music by the Shooting Stars, a young group of native musicians who write music in response to the sound of water. 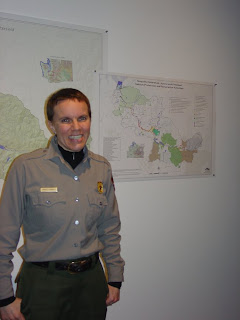 What I really enjoyed is that Basia is truly interdisciplinary in her outreach, there were science professors, biologists, a park ranger (photographed here, this is Marne McArdle at the opening from Mt Rainier National Park), and each one had their own story, their own relationship to the work. The students also eagerly recounted their experiences. This is a successful endeavor, when everyone is involved and cares.

At the same time the exhibition is a major presentation of the artists work. She included work from earliers projects. More about that soon.
Posted by Susan Platt at 7:26 PM