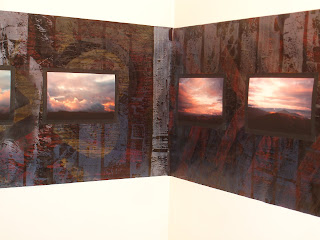 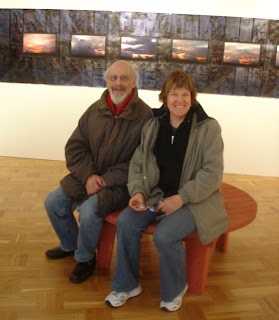 Well I decided it was time to get personal. This is Henry and me sitting inside Rita Robillard's installation Lookout/Outlook about fire look outs. Well it isn't really about fire lookouts, its a statement about the environment paired with an homage to a lost friend. You can see the glowing images set in the midst of dark backgrounds in the installation in the background. Those glowing images are sunsets photographed from fire look out towers, where Rita stayed with her then partner Doug in the 1990s. Doug recently died and this exhibition is a type of homage to those special experiences she had with him. The darkness of the ground is both a darkness of the environment, the shining sunsets, the light of love, but also the life and death of her own relationship, as well as the forest itself. There are a lot of layers here. Robillard has created subtle, rich surfaces with experimental types of printmaking on a large scale. The works are technically subtle, but the overall effect envelopes us. Outside this enclosed space were other images that related to the threatened environment.

Rita and I go all the way back to Gramercy Park in New York City, a beaux art park from the 19th century, which is now a precious piece of real estate with most of its old trees gone, as well as its hedges and its charm. When we lived there it was an ordinary park, rather useless for young children to play in, too much gravel and no playground equipment. We made up games in the dirt about cowboys and indians, but were usually chased away.

Rita and I have had long conversations about life in New York City as our lives have intersected in so many places since then ( including the rusitc, rural Pullman Washington.). We are both marked as New Yorkers for life. The edge of nature/culture is sharp for those of us who grew up in New York. We feel its preciousness, its vulnerability acutely because we had so little nature in New York. I remember walking around the park on the sharp iron spikes that protected the park.
Here is a picture of Rita and me in front of a piece about Gramercy Park, 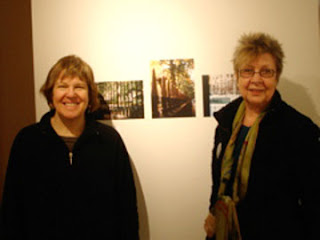