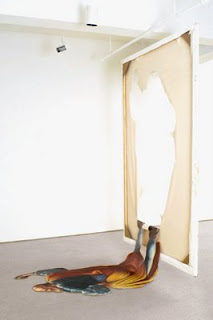 Titus Kaphar's exhibition at the Seattle Art Museum is a brilliant response to the mythmaking American art exhibition from Yale, Life Liberty and the Pursuit of Happiness. Kaphar is literally laying the conqueror to rest as seen in this cut out conquistador who is now removed from his heroic context and lying on the ground. He was part of a performance piece that Kaphar did in Soho, in which he actually included the cutting of the canvas in the performance. 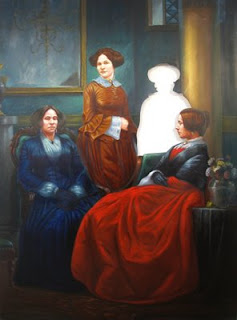 This is called Mother's Solution, it is about passing in the African American Community, passing for white of course. It is deliberately painted in a pseudo untrained style, as thought this bourgeois black family couldn't afford the more slick technique of the top artist. The cut out woman is passing for white. Her space is empty, but next to her is her mother obscured by the shreds of her disappeared daughter, hiding behind a sea of canvas tangling her face. 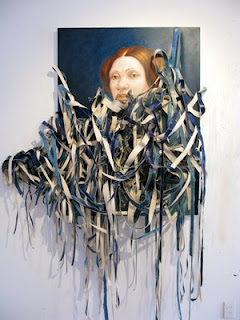 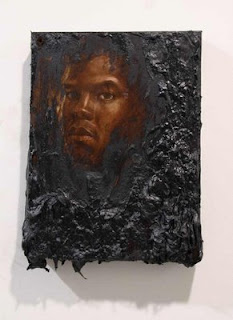 This work is about tarring and the punishment for blacks who are discovered to be passing. 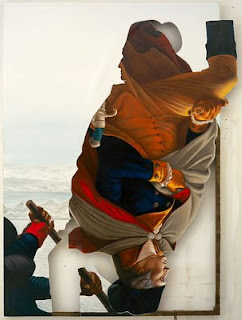 George George George - the hand you see in the lower left is from the famous George Washington Crossing the Delaware as is the image of George. Titus is calling attention to the fact of that black hand, the hand of George's slave, and he has flipped the image of George into a playing card like double. George Washington played some tricks. He had lots of slaves, and he didn't come out against slavery. But of course all of the founding fathers left this blight on our country's founding for economic reasons.
Posted by Susan Platt at 8:20 PM