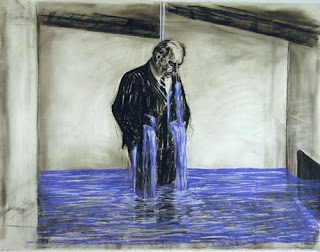 I am writing again about South African artist William Kentridge because I have learned a lot more about him from the catalog for the amazing exhibition in San Francisico, which I won't be able to see. This image is from Stereoscope, eighth of nine animated hand drawn films that Kentridge made about Soho and Felix. Soho is a bureaucrat who is buried in the system. Felix is a creative sensual personality who has an affair with his wife. In this frame from the film, you see Soho in 1999, after the end of Apartheid, after the Truth and Reconciliation commission, with his suit crying a sea of blue. The blue water is flowing everywhere, he is dejected. The blue water is cleansing, but his world has disintegrated. He knows he is guilty, he cannot deal with it. His whole world was numbers, control, greed, money, paper pushing. In the final film of the group, Tide Table, Soho is on the beach reading a newspaper, as people go in and out of the water. It seems to be a type of remission.
The work by Kentridge is about the position of the privileged white artist in the midst of a political system the he rejects, but is also part of, with the white bureaucrat who is greedy and rich, and the creative artist as stand ins for aspects of Kentridge himself. Apartheid, a system of detestable oppression, formed him , supported him, and made him a famous artist . He refers to it as a rock that he carries within him.

In the exhibition at the Henry Art Gallery, Stereoscope is on exhibit along with Memo, a shorter film that is also about a bureaucrat in the midst of a sea of black ink that eventually takes him over. Other works in the show are filled with classical references, the Three Graces, Melancholia. and of course his famous Procession that encompasses the procession of refugees, of political marches, of protestors, of disenfranchised, of mindless followers, all are part of it. Kentridge, since the end of Apartheid refers to South Africa as a post anti apartheid society.

His interest in Mozart's opera, the Magic Flute, with a dancing rhinocerus in the animated proscenium setting behind the singers, suggests the absurdity and the beauty of the world. Kentridge does not suggest solutions to political problems, he does not advocate, instead he offers simply his own personal confusion and misgivings. He owes a lot to the early Russian avant-garde of utopian art after the Russian Revolution as well as Duchamp and Dada. But he too is dejected, he recognizes that utopias have always failed, ideologies don't work. What is left for us. Perhaps only sitting on a beach reading a newspaper as the inevitable tide of water washes over us.
Posted by Susan Platt at 7:31 PM