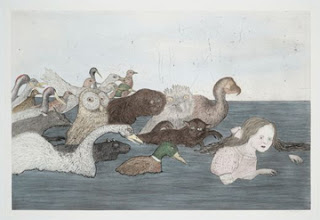 So  I went back to the Henry Art Gallery's Kiki Smith exhibition "I myself have seen it" for another look. It is a complex exhibition and deserves a lot of looks. First I watched the Art 21 video which was really helpful . She talks about death masks, her grandmother's, her father's, her sister's. She herself is cast, that is terrifying. And she talked about Genevieve the savior of Paris. 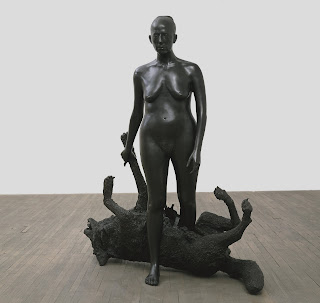 So when I saw the series about Genevieve in the exhibition, it was clear what she was doing. The exhibition includes six photographs of parts of the sculpture, a profile face, lips, a hand,  the legs of a wolf ( perhaps signifying the enemy that Genevieve's prayers staved off from Paris), the wolf's furry face, four animal feet. Together they create an imaginary narrative, much more than the sculpture in which G calmly steps over a supine animal, but this narrative is another story, a story of fragments of bodies that seem to be frozen, even as they create, collectively, a sense of anxiety. The stasis is perhaps related to Genevieve's spiritual nature. But there didn't seem to be any suggestion of the actions that she took to save the people by bringing grain.

Going through the rest of the show starting with a young girl trapped (floating?) in a branch, to odd photographs that seem to evoke fragments of organs, to Mary Magdalene ( we know her story, Christ's "fallen" woman) , to Lot's Wife (who turned to a pillar of salt, if you remember), to the Harpies (perched about on mouldings high above us) , to the witches, to the little girls, dead white animals, dead black crows, shredded puppet, worms, and a photograph of just Guanyin's head on its side (the image is in previous post) which does not suggest her power as a goddess of love and mercy and childbearing. There is only one message for me - violence against women, and especially little girls. The show is presenting frighened girls  and oddly powerless witches. Even fairy tales where little girls succeed, like Alice in Wonderland, seem to be oddly ambibuous - will she succeed in escaping her pursuers??

The question is why doesn't Kiki Smith say what her real subject is, why is she so unwilling to be an advocate for all the victims she creates in her sculptures?? Why does she make victims from powerful goddesses and biblical women. Why can't they fight back? Why doesn't she fight back? My intelligent friend Deborah Lawrence talked me out of saying it is about personal trauma. What do I know, but why is Smith so obsessed with this single subject of death and threats of death and powerlessness.

Kiki adds to the victims in the world without doing anything for them. As far as I am concerned this is not feminism.

In an intriguing revelation, she mentioned that she had worked with Bread and Puppet theater for awhile. But she takes their confrontational approach and empties it of all resistance in making these  prone or frozen or fragmented women and girls.

And what an amazing contrast to the adjacent gallery at the Henry with the photography of Milton Rogovin. 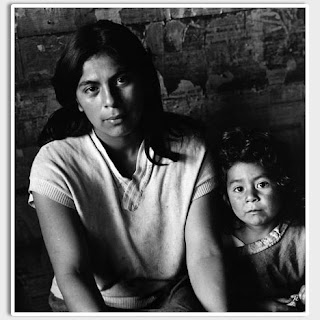 He has photographed the working class for fifty years. He went to Chile ( the image above is from Chile,) Appalachia, photographing. among others, the families of miners and the miners themselves (particularly resonant at the moment with the horrifying greed propelled, mine accidents in the non unionized mines )and repeatedly to the Lower West Side of New York City. His people are dignfiedand strong. He honors them with his photographs.
He wrote poetry about the subjects of his work.
Here are a few of his comments.
"They are regular people just like the rest of us. We must not abandon them."
"Everybody should have an opportunity for a better education."
" All around we saw people with great potential but we knew none of them would realize it under the conditions of our society." 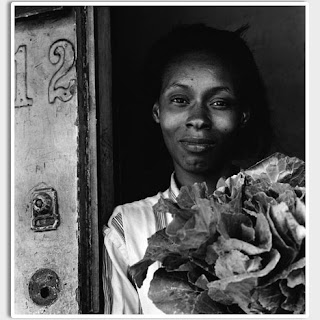 Here is a man who cares deeply about the human condition and has spent his life recording it and speaking up for what he believes.
Posted by Susan Platt at 2:53 PM

Email ThisBlogThis!Share to TwitterShare to FacebookShare to Pinterest
Labels: "I myself have seen it", Henry Art Gallery, Kiki Smith 2, Milton Rogovin, violence against women

I love Milton Rogovin's work. I recently was able to see some pieces that a part of an exhibit at Phoenix Art Museum. Some times when I look at his work it's like there is more than what meets the eye, like there is a story behind the photos itself.