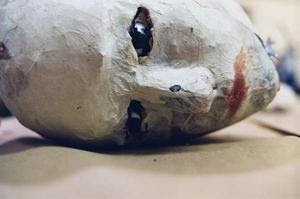 The Kiki Smith exhibition at the Henry Art Gallery, curated by Elizabeth Brown, in collaboration with the artist for many years and years, is a tour de force, not to be missed. Together they went through about 80,000 photographs to arrive at the show. Hats off for a great show and a great installation.
Brown wrote her dissertation on Brancusi's photographs of his own work, those haunting black and white photographs that were first published in the Little Review in the early 1920s by the eccentric genius Jane Heap. (See my website for more information on her). But what a difference. Compared to Brancusi's actions which were relatively straightforward, although the results were beautiful, Kiki Smith, is like walking into a complex game in which we have no idea which way to go or what the rules are.
The title " I myself have seen it: Photography and Kiki Smith " refers to the fact that these are Kiki's photographs of many different types, documentary, journalistic, casual, creative, serendipitous.
Those of us in the press conversed with the artist informally -a great opportunity to try to get a little more straightforward information from the artist ( her artists talk was aggravatingly indirect,  and my bete noir, about her materials and where she got them, although she had some good one liners).

Naturally, I asked her if she was concerned about environmental issues, since we were standing in a room with a lot of simulations of dead white mammals, and also a crucified Christ photograph ( that's my nod to Good Friday, today). She said she didn't like to be polemical, she didn't like to tell people what to think. Where have we heard that before? But in her case, it is true. She lays out the work, the death, the damage, the anguished adolescent girls, the mythic women, the fairy tale girls, the composite bird women, but they are all strangely passive. Oddly,  she said the same thing as William Kentridge, that making art flows from her subconscious, she doesn't know what she is going to do ahead of time. But with wildly different results. Kiki Smith does not engage social political issues, we must conclude that spontaneity is conditioned by who we are. In Kiki Smith's case, I think this show gives us a whole new perspective on who she is and what her work is about.
When I asked her about AIDS, since that was the first work I saw that impressed me at the height of the epidemic (in the art world), she said, oh I just happened to be doing work about the body then (she also said when she took emergency medical training it was just to clinically analyze the bodies) .But her sister had jsut died of AIDS! So where is the anguish, the emotion, the passion? Anyone that can produce this much work has passion, but there is a strangely absent quality, a sense that somehow her consciousness is somewhere else.
Now I am going to make a big leap and a big guess. When I saw the movie Precious, one of the key devices was that when she was being raped, she would escape into fantasy, wonderful living color celebrity status fantasy. She was absent from the world in those times.
I see the same absence in Kiki Smith, her women lie wounded, or stand introverted, her crows are dead, her imagery of Little Red Riding Hood morphing into a wolf/girl doesn't suggest she is empowered by this transformation. Lilith, another woman who has had a raw deal, is just Lilith, not all conquiering Lilith. So what about Kiki's absent emotions. Is this a result of early traumas? I am not going to go further with this and get more explicit,  but that was the message of the show for me. Going from Kiki Smith to William Kentridge, from the "feminist" introvert standing or lying passively, to the male activist declaring greed and capitalism wrong was quite a contrast. I still haven't digested it. I respect Kiki Smith for what she has done, but I wish she would stand up and declare herself. We have to penetrate the obfuscating indirectness ( which is strangely, deeply allied with sixties modernism, as became clear in the lecture).
But the show is really wonderful, dozens of images, all of them beautiful in themselves, that together give us a whole new perspective on Kiki Smith. The Seattle Weekly had a nice analysis of the experience of looking at the show, up, down, and eye level. Sharon Arnold did a wonderful analysis from a completely different perspective than mine.
Posted by Susan Platt at 8:13 PM

Email ThisBlogThis!Share to TwitterShare to FacebookShare to Pinterest
Labels: "I myself have seen it", Henry Art Gallery, Kiki Smith