Two plays about war and one "quilt"

Theaters can make statements about war, directors care, but sometimes it is a little ambiguous what the plays actually say. Two plays in Seattle, Henry V and An Iliad (a modern play performed by one actor, that refers back to the classic but also inserts contemporary references), each one is obviously responding to our permanent war culture. 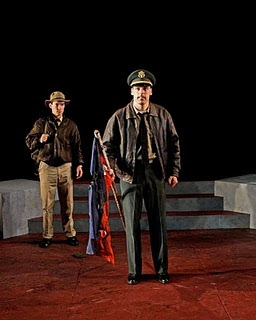 The first Henry V by Shakespeare is really celebrating victory against long odds in war. It was used to rally the British morale during World War II, with a film version starring Laurence Olivier. Prince Hal was a pretty wild kid, but he became King Henry V.When the Church gives him a chunk of money (to avoid having their lands confiscated according to the play's beginning), he's off to war in France, based on some shakey premise that France is actually belonging to the English because of way back when family connection (that sounds like Israel in Palestine). Anyway off he goes and he beats the complacent French at Agincourt because (although this wasn't emphasized but my knowledgable husband informed me) they use the older technology of the longbow while the French used a cross bow with a shorter range. The real story of the war not included in this play, is rather grim, with many women and children dying in a siege.

So is this an anti-war statement??? The Director said in the program that her best friend's son was in Afghanistan. It seems to me the play was an homage to the courage of soldiers.
But then there is Shakespeare's own perspective. It has been said that on the one hand he creates heartfelt speeches by King Henry, on the other hand suggests he is ruthless, and his men mock him.

This play was commissioned by Queen Elizabeth because the Irish troubles had already begun, so perhaps it was intended to give heart to the British. But, of course, underlying it, is the ordinary people and their ordinary thoughts, always a feature of Shakespeare. And of course they were wet, dirty and sometimes uninterested.

To further mitigate its anti war statement, in this production there was a mix of 1940s war costumes, seen here, and 1960s Pop around the Princess Catherine of France who at the end marries our Henry V, which did bring peace. So that makes the war worthwhile??? Or could he have married her anyway and no war. He was offered her at the beginning of the war. ( It is a little like the Vietnam War, Kissinger was offered a peace before it started and in the end had exactly what he was offered at the beginning, after so many years)
Odd Play. Here is another opinion.

An Iliad (this isn't much of a picture but it is all they have on the website, obviously the character was posed before the production) , created by Denis O Hare and Lisa Peterson (who also directed it) was an entirely different matter. It was a tour de force performance by a single actor, Hans Alweis, and he played the entire range of characters ( Hector, Achilles, Ageammenon, Patroklus, Priam, Helen, Paris, Andromache, Astynax the baby son of Andromache and Hector , Zeus, Thetis, Athena) brilliantly, as well as himself (perhaps Homer) and himself again ( a contemporary who sees the meaninglessness of war).

The selections from the Iliad, the parts that were chosen, were perfect to convey the stupidity of war, the needless suffering, the insanity of killing, the arrogance, the egos, the hesitation, the thoughts of avoiding war that were not acted on, all of it was there. The recital of wars from ancient history to the present was staggering, presented in a soft voice that seemed to come out of the actor like a slow drip of blood. It was a similar intention to the slide show at the end of Henry V of art works about war, but had much more impact. The simple recital fit with the poetic homage of the play as a whole.
An  Iliad gave us the full persepctive on what war is about and an extraordinary performance. 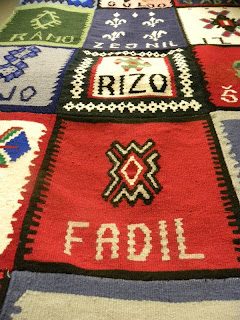 But then there is the Srebenica Quilt made by the widows, sisters, daughters of survivors of that terrible massacre. Each square is an homage to a lost loved one. Each one is actually woven, it is not a quilt, it is done in the flat weave kilim style, a heritage of the Ottoman Empire in this area. It is done by a group of brave, activist women who are extraodinary survivors, who are claiming a burial ground for their loved ones, who are reburying them, who are organizing to declare that they are going forward. This is the message of woman. I wish there were a play about that.
Posted by Susan Platt at 5:24 PM