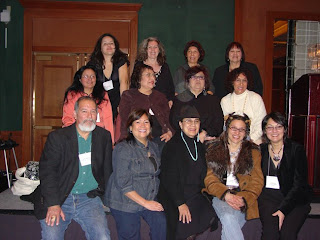 This was the year of Chicana art at the College Art Association! A formidable array of outstanding Chicana artists and one Chicano posed for this photograph at a special ceremony where many received awards. Front row left is Benito Heurto, who gave the award to Celia Munoz, ( in white on the right end of the second row). Also awarded was Amalia Mesa -Bains next to Celia.
Santa Barraza in pink at the other end of the second row, received an award from the Women's Caucus for Art. Finally, Yolanda Lopez next to Santa Barraza also was honored. Laura Perez, front row right, has written a new book on these artists, an invaluable contribution to our understanding of the range and variety of their work.

Also receiving an award was Yoko Ono! This is not her look at the Conference, but close, she had on a big white cowboy hat. 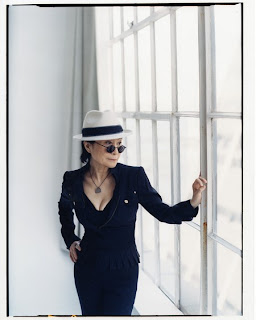 She created a "love in" with all the people who came to hear a conversation with hard core white haired art historian Jonathan Fineberg. Instead of a serious interview, she showed some home movies, handed out little lights and taught the audience to spell "I love you" with them.
Quite an accomplishment. If art historians and artists can say "I love you" with flashing lights, anyone can! One friend of mine who was there said it went right past the brain to the heart and she found herself so moved she was crying. 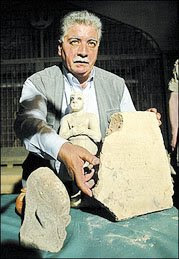 Also honored was Donny George, one of my personal heroes. He was director of the National museum in Baghdad when it was looted and described the events of those disastrous days almost hour by hour as he tried to save the many treasures in the museum. His narrative was easy on the criticism of the US Forces (since he is currently living here), but he told how it took a phone conversation with a curator at the British Museum and eventually a phone call from Tony Blair directly to George Bush to get the museum protected.
George finally left Iraq in September 2006. The current state of the looting of antiquities in Iraq is no longer even discussed in the press here, but we can be sure that it is ongoing and disastrous.
Posted by Susan Platt at 1:34 PM