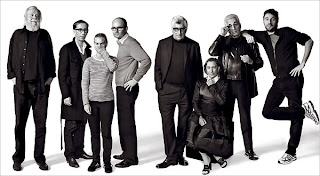 Looking at the dreadful "Redrawing the Art World Women who are expanding the boundaries of how we see, what we see and where we see it" in the March 23 New York Times Magazine, I was reminded of just how corrupted by capitalism the mainstream art world has become. On the cover Muccia Prada in some sort of pricey black dress( the devil wears Prada?) is framed by John Baldessari on the left, and a variety of other well known men and one young (little known) women. Notice that the woman looks like a child and is covering her mouth as though she has been caught by surprise. The many men adopt various confident poses. The photographic style purposefully imitates Irving Penn in several places in the magazine, angular black poses against a blank background. No context, no connection to what is going on in the world. Clearly these artists and this patron do NOT expand boundaries at all!

Then there are the art haulers modelling multi thousand dollar (leather) jumpsuits. Can we have a clearer message that art is meant to play the fashion/style game, rather than actually say something important.

Mari Ramirez is one bright note in the issue, but her show "Inverted Utopias" primarily priviledged abstraction rather than the deep social engagement that characterizes most of Latin American art.

Fortunately, there are many artists out their who are not embedded with capitalism, or who are turning it on its head, as reported in this blog and in other alternative sources. I am also writing on it in my upcoming book, Art and Politics Now: Cultural Activism in a time of Crisis.

The reporting on visual art in the New York Times is embarrassing. Other arts, theater, literature, poetry, dance, all of them are engaged with current political issues and that engagement is reported in the newspaper. Visual artists are represented as completely disengaged.

A review of the amazing book by Roberto Bolano, Nazi Literature in the Americas reviewed in the New York Times Book Review, is focusing on the power of literature to create myths that support fascism. The book contains entirely imaginary writers who are preoccupied with mythmaking as the junta tortures people in Chile, the point is the fact that writers have power to create stories that can either support fascism or resist it. Bolano's book suggests that most writers' preoccupation with aesthetics and other academic concerns feed into the acquiescence to power that corrupts us and makes us passive instruments, rather than active resisters. For Roberto Bolaño . . ."literature is an unnervingly protean, amoral force with uncanny powers of self-invention, self-justification and self-mythification. The mythmakers, he suggests, certainly do matter." While I would have liked a review of a book that focuses on mythmakers who are resisting capitalism, at least political context is included. All art has a political context, but you would never know that from reading mainstream art coverage.

Peter Schjeldahl in the New Yorker, for example, whose reviews of shows such as the Whitney Biennial celebrate the most vacuous, empty art in the show. Surprisingly a non art reviewer caught up on Julia Meltzer and David Thorne, who actually made an effort to address something current, although their most political work was shown outside the Biennial at the Armory.

These two artists got multiple grants to try to represent Syria through their lens. Narcissism has been placed at bay at least a little bit. NEIL MACFARQUHAR who wrote the article writes on Muslims, the Middle East, and other important topics for the New York Times. He recognized that these two artists know that there is a world out there. What he didn't tell us is why they chose Syria and why they chose the particular format that they came up with a type of mime by an actor responding to questions. "We will live to see these things or Five Pictures of What might come to pass" seemed colonizing to me, but at least the artists went to Syria on their own, outside of the system and filmed subjects according to their own choices, not based on pressures from the international art world. The theme is intense, a culture caught between Islamic Fundamentalism, US pressures ( I would say the war in Iraq) , and a "repressive regime" as they refer to it ( that is an unexamined generality that could be further elaborated on in order to avoid a cliche perspective) . Of course the Syrians might see the pressures quite differently. It is not clear how they came with this triad of concepts.

Julia Meltzer has done other socially engaged work. She cares about the world. I would love to know how she decided to make the jump from the LAPD to Syria! But at least she cares.
Posted by Susan Platt at 2:54 PM