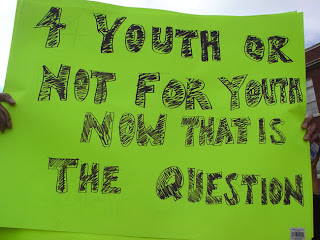 When Kwame Garrett and his friends intervened at the opening of the NAAM, they declared that the museum was a "Sham" . The reason is that they felt that the programs planned by the museum did not reach out to the youth who were vulnerable and dying in the street because of police brutality. The young woman holding this sign told me that the museum would not solve this problem, that is the reason for her sign. A moving interview with Earl Debnam one of the protesters who occupied the building from 1985 - 1993 was broadcast on KBCS radio on March 6, 2008.

There seems to be quite a bit of planning for youth at the museum. Brian Carter, the Director of Education, in Northwest Colors Magazine, is reported to have these plans just for a beginning.
"Carter has brought together students from four local high schools to create a Youth Docent/Curator Program. They will not only give tours of exhibits, but will also work with museum professionals to create their own exhibits. “It’s pulling the curtain back from museums,” Carter says. “Because I know as a youth I thought they were unapproachable and they’re really institutions and you’re just kind of brought there for 30 minutes twice a year.”

That can change, Carter says, by giving youth a say in how the museum operates. After being introduced to the museum and exploring a topic that they themselves chose, “they’ll fabricate the exhibit and then mount it in the gallery, and then they’ll act as tour guides and they’ll give tours of their exhibit to school groups, to organizations or individuals. What we want them to do is once they go through they program, they can be ambassadors for the museum.”

According to the protesters this isn't directly engaging with the current crisis for black youth. A discussion with Kwame Garrett was broadcast on March 13

His perspective is that the museum fails as a community center because it has no places for community activities, performance, film and video production, radio. He calls it a high class exhibit with some housing. The class issue is fundamental to the disagreement. What constitutes culture, what constitutes community? Hip Hop is a huge community in Seattle, but it seems to have no connection to the NAAM so far. UMOJA is a Central District community festival which includes many types of arts is another example of community. But I am sure most of the participants in that festival came to the opening of the museum. And the gift shop is offering lots of community based art works.

It seems to me that the museum and the protesters aren't really very far apart. Culture as a means of intervening in the oppressions and lack of hope for black youth seems to me what both sides want. The museum is embracing the community, and can easily accomodate all types of culture. It isn't even one week old!

Hello. This post is likeable, and your blog is very interesting, congratulations :-). I will add in my blogroll =). If possible gives a last there on my blog, it is about the Câmera Digital, I hope you enjoy. The address is http://camera-fotografica-digital.blogspot.com. A hug.