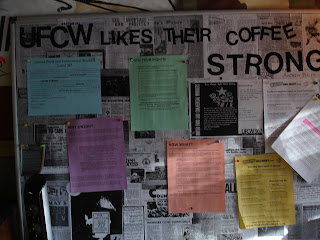 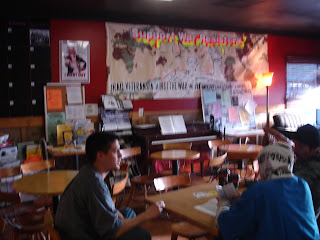 Coffee Strong is a GI Coffee House near Fort Lewis Military Base between Tacoma and Olympia. It is a place for a good cup of coffee and great conversation about war, resistance, how to know your rights whether you are in the military or not! They gave me a card that documented 51 people who had the courage to resist  " Support the Troops who refuse to fight"
Robin Long is the most recently publicized case of a war resistor who was sent back to the United States by Canada and is currently being held in a brig in San Diego. It is important to support these brave people. It is so easy for us to go to a demonstration and hold a sign and yell and march, but these people really put their personal lives on the line to say no to war.
They also gave me a card about the GI Rights Hotline.  Another invaluable piece of information for everyone is  "what are my rights"  that said if a police stops you you can ask if you are free to go . If the answer is yes, just consider walking away. If they say you are not under arrest, but are not free to go, then you are being detained. The police can pat down the outside of your clothing, if they have reason to suspect you might be armed and dangerous. If they search any more than this say clearly "I do not consent to be searched. " You do not have to answer any questions.
This is good information for anyone who is an activist. You might be asking about the art part of this post. Well, they had that covered too. Great 40 remixed propaganda posters like the one posted at the top of this blog.
Posted by Susan Platt at 9:40 PM