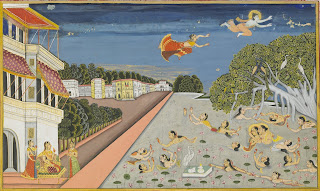 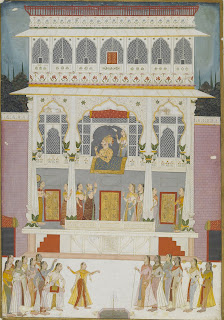 The work just above is Mahraj Bakhat Singh at the Jharokha Window of the Bakhat Mahal, 1735, 37 x 29 inches. You see the Maharaj seated in a window looking down to women who are dancing.
The work at the top is Jallandharnath and Princess Padmini Fly over King Padam's Palace, 1830.29 x 37" This is taken from Hindu stories.
These are huge paintings.

This is an astonishing exhibition We are so fortunate in Seattle to have extraordinary exhibitions come to our city. We have the ONLY WEST COAST SHOWING of this amazing group of GIANT Indian miniature paintings, that were discovered in a chest in the home of the current Maharajah of Jodhpur. Literally, in a closet, according to Debra Diamond the curator. And they re wrote the history of Indian miniature painting. The exhibition just goes on and on with fascinating revelations. I went to this exhibition an astonishing eight times, revelling in its intricate detailed renderings of trees, birds, flowers, fish, and of course, Hindu mythology and Kingly pursuits. The first room has the Maharajah apparently relaxing entirely amid the ministrations of dozens of beautiful women. Of course I thought, oh dear, how decadent.

But appearances are deceptive. According to expert historians, the kingdom at this time (1735)was going through massive transitions from security to insecurity, from the security of affiliation with the Muslim Mughal Empire, to the insecurity of being ordinary leaders of kingdoms with ( in the case of Marwar-Jodphur one of the Rajput Kingdoms in the North) few resources. The purpose of these miniatures is to "Maintain a Kingly Aura in Hard Times" . This is the phrase of Purnima Dhavan, an assistant professor of history at the University of Washington. She gave a brilliant lecture explaining this with big arrows sweeping across the state from various directions. Therefore we can see that these paintings, like those in "Life, Liberty and the Pursuit of Happiness", are also government propaganda.

The next two sections of the show are using religion to promote kingly power, Hinduism, and Nath yoga "aesthetic" yogis ( apparently they were very well off). But it is actually all about power plays, how leaders use the people around them, or other people to stay in power. How do artists respond to this desire by painting the invisible, that is what we learn in the last sections of the show. We of the West look at the colors, shapes, lines and say how beautiful. But there is much more to it. According to Michael Shapiro these miniatures are about sharing emotional states called Rasas. anger, fury, fear, tranquility, eroticism, pity, compassion. Perhaps that is more obvious to us now that we have all seen Slumdog Millionaire.

I am addicted to this fascinating exhibition about a period of art that I know nothing about. At the end of March, the current Maharajah Gaj Singh II came to Seattle from Jodphur. He was a delightful and modest man. He has founded an international organization that addresses head injuries because his son suffered from a serious injury in a polo fall. He is also encouraging women's education. His position is now what he calls "tribal" . Under the British Raj in the late 19th and early 20th century, the traditional status of Maharaja's was diminished. Then after democracy, they were further moved out of the political system. But Maharajah Gaj Singh II is still a regal figure with a deep concern for the people in his region. He pointed at the painting of the installation of the Maharajah centuries ago and said he remembered the same event in his own life when he was four years old.
This piece is called Cosmic Oceans, 1823.

I saw this exhibition in London a couple of months ago - it was incredible! I especially enjoyed those commissioned under the Maharajah Man Singh (I remember them being at the end). I couldn't afford the exhibition guide but I would love to know more about everything!