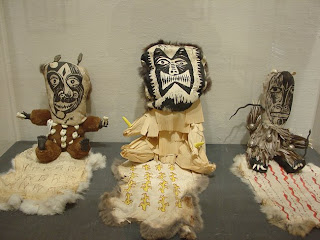 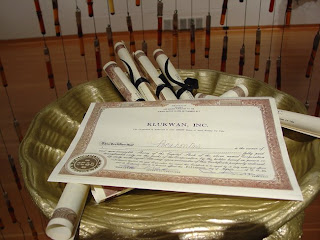 One top image is by John Feoderov Totem Teddies, the bottom is by Tanis S'eilten, Blood for Shares.

This exhibition is only up until March 22. It is in the Whatcom Museum in Bellingham Washington. But what a great show. It includes all contemporary Native American art by John Feoderov, Tanis S'eilten ( two friends of mine whose work I really admire) as well as Roxanne Chinook, Ka'ili, Larry McNeil, Ramon Murillo . The works are quirky, funny and intensely political. Tanis addresses issues that relate to Alaskan natives, like the pollution from cruise ships, land grabbing then and now, and the corporate culture that was forced on native tribes in the first oil agreement for exploring the North Slope. Fedeorov is relentlessly mixing contemporary culture and religion, kitsch shamanism in works like the Office Shaman and Temple. The other artists all address environmental and cultural issues. It is so refreshing to go to show where all the artists have something to say and aren't afraid to say it.
Posted by Susan Platt at 8:54 PM

Email ThisBlogThis!Share to TwitterShare to FacebookShare to Pinterest
Labels: Trespassing