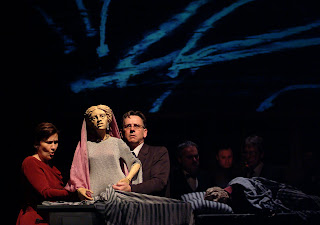 I have already previewed this amazing work. The full production was absolutely fabulous.
How lucky Seattle is that Stephen Stubbs decided to found Pacific Operaworks in Seattle and to bring us this phenomenal performance.
The Monteverdi opera is, of course, the story of Ulysses return to Ithaca after all of his adventures where he was waylaid by various beautiful women and natural disasters, wayward gods, and adventures ( Homer's Odyssey). The Opera was presented by extraordinary singers. The baroque era is clean and melodic compared to later opera. The singers were mostly paired with a large wooden puppet for each character, ( except Ulysses who had two), Penelope was the star, seen here with the brilliant singer Laura Pudwell and her "handler" , then there was Telemachus, Ulysses son, Zeus and Eumaeus ( a shepherd), and there was also Athena, Neptune, Time, and more
The baroque music was performed on stage with amazing period instruments including the chitarrone played by Stephen Stubbs. For an informed review on the music see the Post Intelligencer writer R.M. Campbell The stage design itself was Kentridge's idea, it was a seventeenth century theater.
Behind them was Kentridge's animation. It was brilliantly correlated with the action on stage. There were flowers growing when love was sung about, body parts and medical imaging - including colonscopy, open heart surgery, sonograms) for the dying Ulysses in the center of the stage ( a Kentridge addition to put him in Johannesburg, South Africa), images of flowing water for the wandering Ulysses evoked by Penelope and other life forces. When Penelope was sewing we had Kentridge lines at strong diagonals moving around, when she sang of love plants turned into bodies, hearts turned into plants; lovers were blotted out when Penelope sang about the brevity of love, when the courtiers tried to woo her a scale appeared with gold on one side and a heart on the other. I loved the scenes when Ulysses was travelling and the animation traversed cities, landscapes, Greek temples, as he swayed in front of them, utterly convincing, like those old movies when people were in cars, and the landscape moved behind them.
It all worked incredibly well. He did finally get home, inspite of Penelope's doubts. In Kentridge's staging, the two re united over the dying Ulysses in a hospital in Johannesberg. So it fit with his performance. No matter what, we want to hold onto our dreams and ideals, and carry them on our backs forever. It was of course obvious that Penelope would ask after the joyous reunion
"where have you been big O?" but the play ended first.
The action of the puppets was unbelievably subtle, utterly convincing as movement of actors.
The singers were stunning.
Don't Miss It!!
For another opinion you can read this article on artdish. I completely disagree with what is written there, but I should at least honor that it has been written. And perhaps you might agree with it.
Posted by Susan Platt at 6:14 PM