Life Liberty and the Pursuit of Happiness 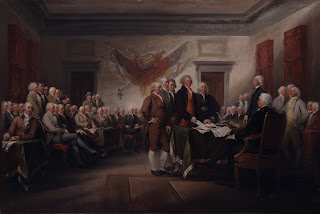 Ok, here is a chestnut. What is wrong with me you might be asking. And there is that cliche in the title of the blog. Well believe it or not, the Yale Art Gallery is loaning some of their stellar works to the Seattle Art Museum and that is the title of the show. These are the original paintings of American art history and its partner, the myth making foundations of the Republic. This painting for example is pure myth as we were told. These people were never in the same room together. John Trumbull traveled all over to get portraits and then assembled them in the painting. Of of course, all white men with property and Jefferson biggest in the center, although he owned slaves, as did George Washington.
The whole show is a stunning group of works in every sense of the word. It includes the movement west, manifest destiny ( we even have the Golden Spike photograph of the connecting of the East and West railroad in Utah, of course the Yale people don't know about our own Seattle based Zhi Lin, and his brilliant work commenting on the marginalization of the Chinese workers in the photograph.) And great political cartoons
The Yale American Art Collection contains almost primal benchmarks of the history of American art perhaps even the history of America on some level. It includes all the major artists, Homer, Bierstadt, Eakins, even Henry Ossawa Tanner, one of the outstanding African American artists.

But it is all propaganda, by privileged artists on the East Coast, painting for a privileged audiences.

And of course artists of color are represented only lightly, one African American walking stick, one chair made by a slave, a chest maybe by Mexicans, the painting by Henry Ossawa Tanner (who had to live abroad because of racism). There are also pencil drawings of the Amistad mutineers that are worth seeing in themselves. Amistad is the name of a ship on which the slaves rose up and killed the white crew. They were tried in New Haven in 1839 during the abolition movement and then sent back to Africa. The decorative arts are more "multicultural" in a way, intriguing sources in various places in the world.
And then there is the miniature with the interwoven hair of George Washington and Martha Washington. That was kind of astonishing, and you would miss it on the back of the painted miniatures unless you know what to look for.

It is intriguing to line this show up with Cosmos and Garden at the Asian Art Museum. That is also a mythmaking show, of maharajas in India. I will get to that next entry, but not tonight.
Posted by Susan Platt at 7:47 PM

Email ThisBlogThis!Share to TwitterShare to FacebookShare to Pinterest
Labels: "Life Liberty and the Pursuit of Happiness" Seattle Art Museum

Desire to leave express my admiration
to the beautiful work of this Blog,
yours truly,

Thank you Efigenia I am excited that someone in Brazil is reading my blog.
Susan