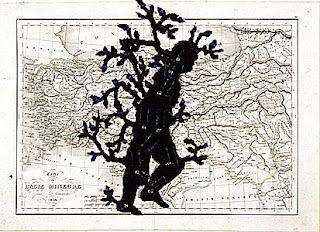 This week we were on the cultural map with a performance by William Kentridge on Monday and an opera by Kentridge on Wednesday.
At the Henry Art Gallery, the performance, "I am not me, the horse is not mine"had its North American Debut. Naturally, I wasn't allowed to take pictures. This is a picture of a related idea, as you will see. I did take a few notes
The stage set echoed his studio, with a simple scaffolding, a working wall, with pentimenti of work removed, and the artist running through sets of notes. Back projected on the studio wall appeared the artist himself, once, twice, three times, at various times. The real Kentridge sometimes seemed to chase off these other Kentridges, sometimes dictate to them while they took notes, sometimes bore them to tears, and sometimes collaborate with them, as when he threw his real notes away and his photographic double caught them.
He started out with Gogol's The Nose from 1837 which was made into an opera by Shostakovich in 1928 at a critical transitional moment in the early Soviet Union, when creative thinkers were still allowed to work, just before the Stalinist era began. (Kentridge is actually going to present this opera next year)
He told some of the story ( one can't help but notice that the artist has a prominent nose, and therefore perhaps is attracted to stories about disappearing and reappearing noses)
He went backwards to an earlier version a story in a story from the seventeenth century, then Don Quixote.
Meanwhile the wall also projected some of his "stone age animation" images, and such images as video footage of himself (already mentioned above) and him awake at four am with a busy mind. The title refers to cut out collage pieces that seemed to form a horse for us, and as it fell apart, we still saw horse forms.
Here are a few quotes, that I found provocative:
"how much of the outside world do we need inside us to make sense. And we cannot stop making a meaning from shape, even as it disappears we hang onto it.
We hang onto a skeleton of utopia.
Constructing meaning in the world is half of who we are.
We are heads banging against our own limitations. "
Meanwhile, animated images of things falling down including "that ridiculous blank space"
The animation also included the familiar marches of burdened people, but here they seemed to be carrying slogans from revolutions, rather than their worldly possessions as in his works that focus on South Africa.

The idea for me is that this performance speaks to a time when things in the world are changing ( as they are now, the performance was presented at the Sydney Biennial in 2008) when we carry dreams and ideals around until they have no meaning, much as we carry things around. Since Kentridge was shaped by apartheid South Africa, the post Apartheid era has been just that. Where do we carry our ideals and principles now. How do we go forward with our old ideas of equality and liberation.
It speaks also to our current state in the United States: as Obamamania gives way to reality, that he is of course part of the same system as George Bush, and a pawn in a larger system than he can possibly really change, what do we do with our hopes and dreams? Do we keep on lugging them around. Of course we do, even as they come crashing down. We go on demonstrating and protesting.
A long section at the end of the play was reading from the trial of Bukharin, one of the most pivotal of the early revolutionaries, as he was forced to explain himself, and yet taken off to prison. The crashing of his ideals is in every line.
Posted by Susan Platt at 5:55 PM

Email ThisBlogThis!Share to TwitterShare to FacebookShare to Pinterest
Labels: Henry Art Gallery, Kentridge I am not Me The Horse is not mine