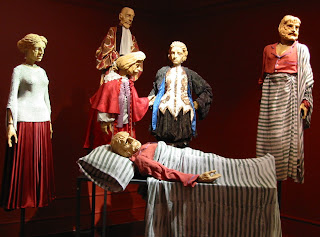 Take a look at this image. It is pretty extraordinary. This is the work of William Kentridge in collaboration with Hand Spring Puppets and Monteverdi. We went to a press preview with an excerpt on Friday. In the center is Ulysses as a hand carved wooden puppet lying in a hospital bed dying in Johannesburg, reliving his life. He appears a second time on the right. He is remembering his return to Penelope after all those years. Penelope is on the left and in the middle are three of her courtiers. Opera singers sing the parts of the Monteverdi Opera Death of Ulysses, but the puppets are the center of attention. The opera singers are subsumed behind the puppets, the puppets move as they "sing" The micromovements of the puppets is the really subtle aspect of the performance according to the puppeteers.

The background has a video by Kentridge. All of these elements are pretty hard to take in at once. Then there is the Baroque instruments, period harps and other instruments. Pacific OperaWorks is bringing this complex performance to Seattle. It is really something not to miss. 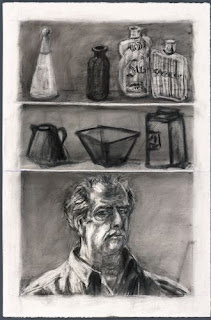 At the same time, the Henry Art Gallery is having a show of Kentridge's work (as is the Greg Kucera Gallery, which I haven't yet seen). It is an intriguing little collection of works that I really enjoyed. Several of his "stone age videos", animated are always fascianting. You have to take time with them as in the bureaucrat eaten alive by his profession, and and line taking over the artist. The idea that the medium somehow has a life of its own has always been one of my favorite Kentridge ideas. His videos often seem to consume themselves, swallow themselves alive, in a type of Jonah and the whale feeling. Life is sucked out of the screen.

In addition, there are drawings, paintings, prints, sculpture. The little bronze collectibles set me back. They seemed so commercial. But the sugar lift aquatints really give you a sense of his graphic talent. In the show as a whole, you also have a sense of his classical roots as an artist, Durer in particular. Also his sense of humor.

Kentridge is a theater person. The opera is his idea, but of course he is using Monteverdi. The staging it with puppets and adding an animated backdrop is his idea. This is a work from 1993. It is not new, but Pacific Operaworks is new.

So where are the politics in all of this ? I asked the puppeteers and they said it wasn't political. But I disagree. There is a lot to think about here. Fragmentation of relationships, death, life, seduction, deception, all wrapped in a multimedia complexity that requires a lot of thought. The trick is not to be seduced by any one element, but to see the big picture of where Kentridge is coming from. Life and death caught up in forces beyond their control leading to tragedy.
Posted by Susan Platt at 7:15 PM

Email ThisBlogThis!Share to TwitterShare to FacebookShare to Pinterest
Labels: The Death of Ulysses. Henry Art Gallery